Clean and green energy is the hope for the future. While the concept of a self-sustaining home that runs on solar energy is very tempting, knowing your home’s power requirements is vital to running high-energy items like refrigerators.

A fridge can run off a solar panel if you have multiple panels and an inverter system with a battery. To find out more about this and other ways to run large appliances in your home, keep reading.

How Much Energy Do Fridges Need?

Most people know that refrigerators use quite a lot of electricity. Newer models are becoming more energy-efficient while also incorporating more features.

For those looking to save on electricity, the first idea most are told to investigate is appliances. Older appliances, especially refrigerators, use a lot of power. Many people are proud of their decades-old “retro” fridges, but those are the worst appliances to have when it comes to energy efficiency.

For those who want to use solar panels to power their entire home, energy-efficient refrigerators are vital. Since water heaters and fridges use the most energy in the home, these appliances take up most of the power from solar panels.

Water heaters and refrigerators use a similar technology to operate. Both use a lot of power to reach a certain temperature, and they continue to maintain that temperature without using too much energy afterward. However, any time there is a lot of usage, power requirements increase.

When a fridge is opened for too long, or when something warm is added to it, the power consumption increases to make up for the change in temperature and stabilize the temperature once again. This consistent need for power is what makes solar power less than ideal.

A fridge cannot run off solar panels only. During cloudy days and at night, solar panels stop producing energy, so fridges cannot run without a proper battery for energy storage, leaving the food inside in some danger.

If you are using a smaller refrigerator on a solar panel, you may have more success. Read “Can You Run a 12-volt Fridge from a Solar Panel?” to find out if smaller appliances can operate with solar panels. 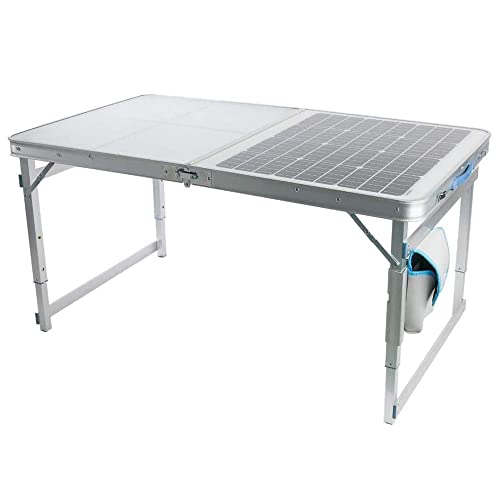 How Much Energy Can a Solar Panel Produce?

There is no set amount of energy that is produced by a solar panel. The production is based on several variables, such as the weather, the location, and the angle of the solar panels.

Solar panels do not function individually, so one solar panel will not be enough to run many appliances, least of all a refrigerator. For more information about how many panels are needed to run a fridge, take a look at “How Many Solar Panels Does It Take to Run a Refrigerator?”

When judging the efficiency of a solar panel, the wattage is important. The DC power produced by a solar panel is the peak wattage. Solar panels perform at their peak when they receive at least 1000 megajoules of solar energy (source).

The exact amount of energy generated by a solar panel is based on the wattage of the panel. The more panels, the more power produced. More expensive home systems have between 60–70 panels and can produce between 260–400 watts of power.

Smaller solar systems at home can have as few as 10 panels and still create a significant amount of power, depending on the strength of the solar panels.

If you examine an appliance, it will state what the wattage of the product is. A 100-watt solar panel should technically be enough to produce power to light up 10 10-watt bulbs (source).

Most domestic refrigerators use between 100–250 watts of power, indicating that a 100-watt solar panel is enough to power an efficient fridge model. However, refrigerators that use as little as 100-watt are generally smaller fridges, such as bar versions.

This calculation only works in an ideal setting, and solar panels rarely achieve the perfect environment for energy production. Fridges require a constant source of power to function optimally, and even during daylight hours, energy production is not consistent.

When a solar panel stops producing power during less ideal weather conditions or during the night, the fridge would not get enough power. Other systems are needed to store power for usage throughout the day in order to use solar panels to power a refrigerator.

Smaller, less efficient solar panels cannot be used in this regard, as there has to be an excess of energy produced to be stored for later. But let us examine what kind of systems can be used to keep refrigerators running throughout the day. 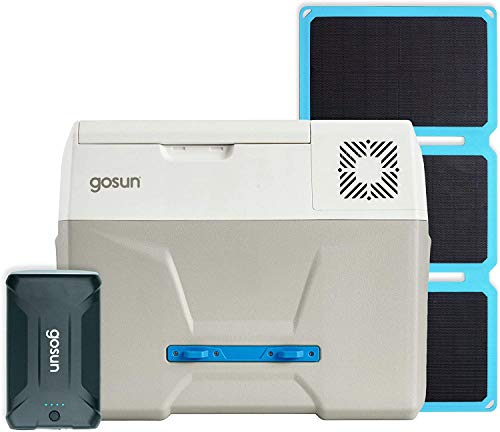 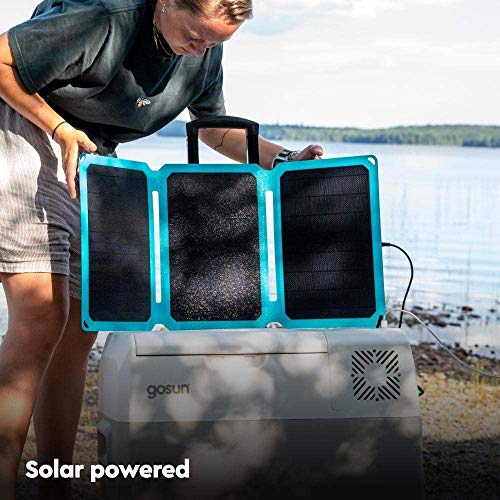 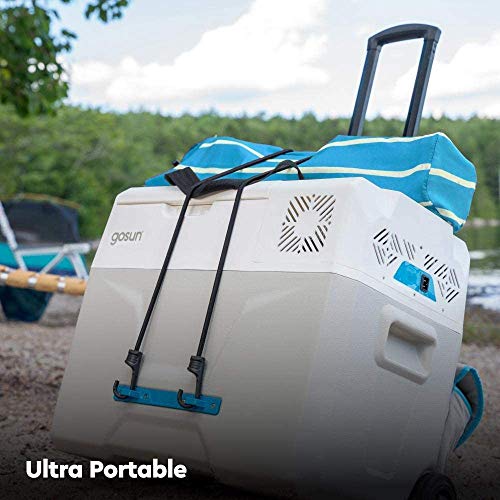 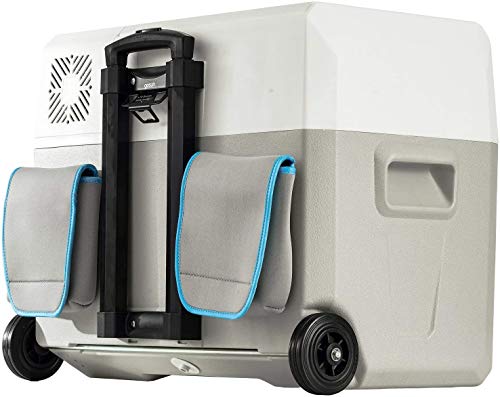 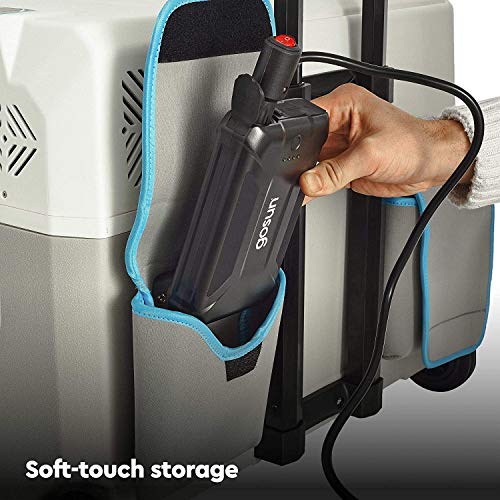 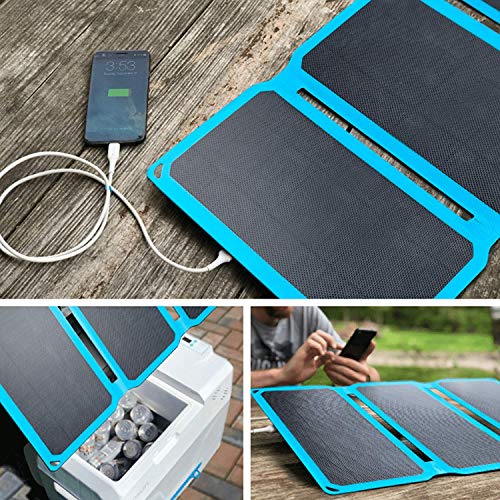 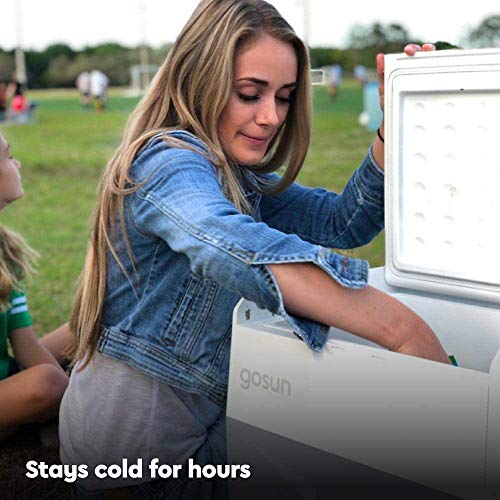 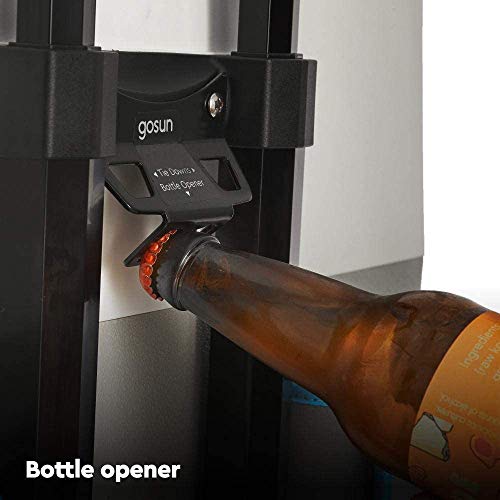 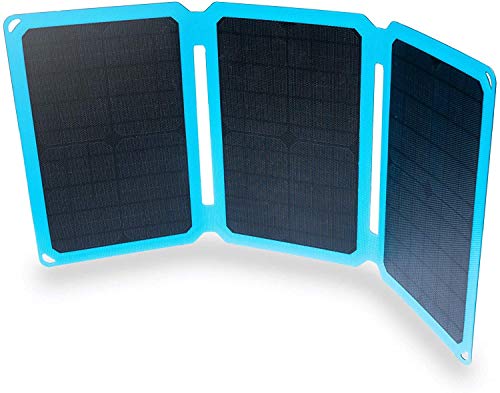 Other Systems to Power Fridges

Solar panels can be used in several ways. Some homes and businesses use solar panels on their own and use the electricity produced during the day only. This system usually needs to be backed up by the electricity grid to keep things running when power production is low.

An inverter system with batteries is needed to store power to take full advantage of solar panels. This system allows solar panels to continue powering the home or business without relying on the electricity grid alone.

Solar panels are becoming progressively cheaper as new production methods emerge, and more governments are subsidizing their citizens to use clean energy. However, they are still a significant investment, and it is important to know what you are paying for.

There are a few types of systems that can be used within the home to harness solar energy.

A grid-tied system is commonly used across the industry and is generally a cheaper option using solar power. Grid-tied systems allow for the conversion of solar power into electricity, which then powers your home.

If excess energy is produced, it flows into the grid, which is the electrical infrastructure of the country (source). When there is no power being produced, your home takes electricity from the grid to power appliances again, though this is usually at a lower cost.

A hybrid system is quite similar to a grid-tied system, but instead of sending excess energy back into the grid, it is stored in batteries within your home. The stored energy is then used during periods of low power production.

These types of systems are especially useful in areas that suffer from frequent outages. The costs associated with batteries make this system a little more expensive than a grid-tied system.

Off-grid systems are the best way to remove yourself from the national power grid. This system needs more solar panels and larger batteries, as these are designed to power your home regardless of the grid situation.

Off-grid systems involve the production of a lot of excess electricity, which is then stored for later use. There is no grid backup system, and most owners prefer having a generator in case of a major failure.

These systems are easily the most expensive because they include a lot of components. There are several items needed to create a system that allows for the storage of solar power.

First, you’ll need a battery. Batteries are rated based on amp-hours. According to industry standards, a battery is based on a 20-hour cycle, so a 100 amp-hour battery should provide 5 amps per hour for 20 hours.

A battery is a vital investment to run a refrigerator, and most batteries have no problem running a fridge along with other appliances.

Second, you’ll need an inverter. Since solar energy is stored as DC power in a battery, an inverter converts it to the AC power needed to run all appliances. Inverters are far from efficient and careful research is needed before buying one.

Inefficient inverters can lose up to 50% of the DC power in conversion, so finding a good one is key to keeping your fridge running.

More countries are moving away from coal-based power production. The environmental and health costs associated with coal-based systems have become too much, and governments across the world are encouraging clean energy.

Solar systems are becoming more efficient as time passes, but running large appliances like refrigerators require a lot of power. Knowing your power needs will allow you to create and run a solar system that is perfect for you and your home. Solar water is a convenient energy saver, yet there has been controversy regarding its effect on hair loss. We all want to know we are doing the right thing for ourselves and the environment, but is that the case here? To help you figure out the pros and cons of solar water on your hair… Solar panels come in many shapes and sizes. They capture the sun’s energy and convert it into electricity and thermal energy. However, electricity attracts dust and other particulate matter, which will settle on solar panels, effectively blocking the sun. To maintain your solar panels’ integrity, you need to clean them, but what is the best… Are you wondering if it is better to use a solar blanket or a solar panel? Both are suitable methods to harvest the sun and produce electricity, but each has positive aspects and negative points. Depending on what you plan to use them for, you need to decide whixh to use that best suits you…