In the relentless drive towards a greener environment, renewable energy sources are increasingly important. So, when the sun beats down to overheat your car’s interior, it makes sense to use the power of that same sun to cool it down. Enter the world of solar-powered air conditioning (AC).

To run a car’s AC on solar, you’ll need a photovoltaic (PV) panel and a battery system to power the electric motor that drives your compressor. You’ll also want a charge controller to prevent the loss of energy gathered from the PV panel. But there are drawbacks to attaching a large PV panel to your car’s roof, although some newer cars have this feature built-in.

I’ll discuss a few of the pros and cons of using solar energy for car air conditioning units, the technology involved, and the current limitations on vehicular solar power.

In a normal combustion engine, an AC compressor is belt-driven off the alternator. This compresses a refrigerant gas into a liquid form fed into a condenser that removes heat from the refrigerant and pushes it along onto the expansion valve or orifice tube, turns it back into a gas, and passes through a drier to remove moisture.

This gas is then transferred to an evaporator that eventually pumps cooled air through the vehicle cabin’s air vents.

A solar-powered AC works in exactly the same way, except that instead of the compressor being driven off the car’s engine, it is electrically powered by a battery that is kept charged via the rooftop PV cells. Most cars are fitted with lead-acid batteries, but one of the newer-generation deep-cycle or lithium-ion batteries might be even better.

Y. Lethwala and P. Garg of the Bhagwan Mahavir College of Engineering & Technology (BMCET) of Surat, India, experimented with an auxiliary car air conditioning system using solar energy and published their findings in the International Research Journal of Engineering and Technology (IRJET) (source).

The study contains a modified circuit diagram of an auxiliary solar-operated automobile air conditioning system. They used a typical lead-acid battery connected to the solar panel with a charge controller (shown as a one-way diode) before branching out to the alternator, the DC motor and air conditioner/compressor, and the condenser fan.

A car AC system pulls a fair amount of power; how much exactly depends on the make and model, driving conditions and ambient temperature, and a host of other factors. And of course, there is an obvious correlation between the amount of sunshine, the size of the panel, and its ability to cool the car’s interior temperature.

Y. Lethwala and P. Garg found that an automobile AC compressor can be run off a 230-volt motor generating 740 watts of power, generating enough energy from a polycrystalline rooftop solar panel to run the motor for an hour a day.

Companies are working to increase solar panel efficiency for cars, and Toyota’s experiments in 2019 appear to have produced panels with a 34% conversion efficiency that can produce 850 watts (source).

A previous study from the Hong Kong Polytechnic University extolled the fuel-saving benefits of a roof-mounted, solar-powered air-conditioning system for vehicles (SAV) that was able to activate the AC system automatically when the engine was switched off (source).

Such a system would be a bonus for inhabitants of warm climates, such as in the Middle East, where daytime temperatures soar to 110°F. When going shopping, the locals are known to leave their vehicle’s engine running with the AC switched on in the parking lot so that they don’t return to a blisteringly hot vehicle.

Although the technology surrounding electric and hybrid cars is evolving rapidly, none of the commercial vehicle manufacturers can yet claim that their cars can be charged only through solar energy.

Currently, vehicles that do incorporate solar panels on their roofs, such as the Toyota Prius Prime and the Hyundai Sonata Hybrid, are using those panels more to power systems like the car stereo and air conditioning.

Other limitations will be touched on in more detail later, but the main limitation is the size of the solar panel. 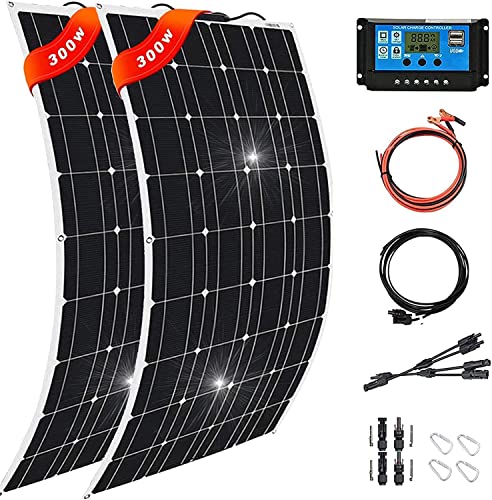 So, when it comes to solar AC panels, size matters. The same applies to the size and capacity of the batteries needed to store the power generated. Solar cells convert light directly into electricity using the photoelectric effect, which is the emission of electrons when light strikes a material.

Current crystalline silicon solar cells still only convert about 20–40% of incident light into electricity, so it takes a lot of cells to generate a small amount of electricity. As a result, in 2016, solar only generated 1.3% of global power.

For an example of other domestic applications of solar-powered appliances, see “How Many Solar Panels Does It Take to Run a Refrigerator?”

So, if you want to run your car’s AC off solar, you need an expanse of panels, which is unsightly on the roof of your Ferrari, to say the least. However, some models like the Prius, Audi A8, and Mazda 929 have solar sunroof options that are less visually intrusive but currently are only really effective for ventilation purposes.

Cost is also an inhibiting factor. Sunlight may be free, but the cost of making solar panels, while steadily decreasing, is still pricey.

Thirdly, there are design and safety considerations. Solar panels must be designed to withstand vibration, and as they are manufactured from glass, this is a concern in terms of weight and safety in case of an accident. In addition, the energy consumed to propel its weight may negate the energy saved in using this free and renewable resource.

Although PV cells have a lifespan of about 30 years, which is significantly longer than the lifecycle of the average car, there are some worries about what to do with solar panels when it comes time to scrap them.

As a result, solar power, or rather its manufacture and responsible disposal, may not be as clean as we make it out to be. The bottom line is that all forms of energy production have an impact on the environment. We have to ask: is the cost of a cooler car interior using solar energy really worth it?

The Case For and Against Solar Power

Solar power is touted as a clean and infinitely renewable resource, but is it? It is true that as long as the earth continues to revolve, the sun will continue to rise every day.

The amount of solar energy reaching the surface of the earth is almost unimaginably huge —  about twice as much in one year as will ever be obtained from all of the earth’s other non-renewable resources, such as coal, oil, natural gas, and uranium combined (source).

But harnessing that energy is not as easy as it may seem. While the oil and energy crises of the 1970s brought a renewed interest in other energy sources as an alternative to fossil fuels, the technology to tap into and particularly to store solar power has been slow to catch up.

Storage of solar power is key because the sun is not always shining — certainly not at nighttime, and only for reduced periods during the long northern winters and frequently overcast days.

So, there are problems in converting solar energy to usable electricity, problems in stabilizing the intermittent supply of solar energy between day and night and between sunny and cloudy days, and problems of storing that energy using today’s battery technology.

Where It Works Well

Not surprisingly, the potential for solar to work well has been mostly tested in hot and sunny climates, such as in the already-mentioned Middle East.

An example of whole-community adaptation to renewable energy resources is Masdar City. Established in 2006 just outside Abu Dhabi in the United Arab Emirates, Masdar is building the world’s most sustainable city in the heart of one of the world’s largest reserves of fossil fuels.

Their “EcoBus,” introduced in 2018, uses roof-mounted solar panels to power auxiliary systems together with “enhanced glass” for maximum reflective capabilities and minimization of heat conduction (source).

It is perhaps significant, though, that their transportation strategy starts with neighborhoods that provide all basic services within walking distance, based on the principle that it is more sustainable to walk to the store or café than to use a vehicle.

It is also no coincidence that Masdar has mounted this solar technology on a bus rather than on a smaller passenger vehicle.

This is in part because their Personal Rapid Transit (PRT) system discourages private transport in and around Masdar City itself and, in part, because the solar panel technology needed to power an air conditioning system takes up quite a lot of space on the roof of the vehicle.

Although more work may be needed to make it accessible for all, solar power can be used to power the AC in a car. Solar energy has almost infinite potential to satisfy the world’s insatiable thirst for energy.

The limitations on tapping into this energy source seem to be largely of a technical nature — our ability to convert and store solar energy when and where it is needed.

This is the state of play for using solar energy to power the AC in a car. When we find a convenient way to convert and store sunshine, we will have gone a long way to driving around in the cool comfort of an air-conditioned car. There is no denying that paying for your monthly electricity bill is expensive. It is the reason why people prefer to use solar energy. True enough, solar panel installation is costly. But not having to pay for an electricity provider monthly means more savings in the long run.  But what appliances can run on solar… Would you like to know how to run a microwave on solar power? Solar energy can be used to power microwaves, although you have to have a proper setup since this household appliance can consume quite a lot, especially when starting up. In general, almost all appliances can be powered by solar energy. So if… A 3,000-watt inverter provides electrical power and can support multiple house appliances such as computers, cellphones, lights, fridges, and many more. Essentially, any electrical item is compatible, provided that the used power is within the limits of the inverter. Inverters can accommodate either a 24V or a 12V battery. A single 24V 125AH battery would…